When did you first discover scientific illustration as a potential career?

During my postgraduate study I competed a few illustration projects, mostly for colleagues. This was when I got a bit serious and registered an ABN. The first time I could actually support myself full time was when I was offered the Tree of Life illustration project by my PhD supervisor (and world renown elasmobranch taxonomist) Dr Peter Last, and by (the supremenly inspirational scientist) Dr Gavin Naylor. This was after I finished my PhD of course! It was truly a case of the stars aligning, ‘right place, right time, right project’. This was when I really honed my skills as a full time illustrator and realised it as a potential career.

What was the first scientific illustration you ever did?

The freshwater Fish Research Group at Murdoch University are who I have to thank for the foundation of my illustration career. I was headhunted during Fish Biology laboratory prac by Dr Howard Gill, and, consequently, did an independent study contract during the final years of my undergraduate degree (2002). My project was to describe the larval development of the Murchison River Hardyhead (Craterocephalus cuneiceps). I had to draw the tiny larvae of these tiny fish using a Camera Lucida, following Pancho Niera’s beautiful text 'Larvae of Temperate Australian Fishes’ as a reference. The beautiful drawings in that book inspired me to be a scientific illustrator.  Dr David Morgan from theMurdoch FFG was the first person to commission a fish illustration from me and has been a loyal patron ever since. Before them I used to just ‘draw animals'.

Did you have specific training and/or apprenticeship?

As an illustrator? I studied Tertiary art in year 12, and that’s it! As far as illustration is concerned, I am self taught. All of my formal training is as a research scientist, so I feel I have a very good appreciation for what a scientist will require from an illustration. Clarity, accuracy, a bit of aesthetic quality. I have an uncanny ability to ‘paint the things the way the things looks like’, as Dr Susan Theiss says! Accuracy is important to me. I would consider myself to be un-creative in that regard. I feel that I simply document the beauty of the natural world, and that nature does all of the creative work for me. I just take credit for it!

I would love to have the time to do some formal art training. I would like to improve my freehand sketching, and I would love to be able to paint in the style of an impressionist.

What scientific endeavours have you contributed to?

I have contributed to a number of scientific papers, Dr Shannon Corrigan’s brilliant Wobbegong paper, some papers by Ass. Prof. Aaron Wirsing on predator interactions, Dr Adrian Gutteridge’s tooth morphology paper, to name a few. I did a book cover for "Economically Important Sharks and Rays of Indonesia”. Currently I am collaborating with Dr John Paxton (Australian Museum) and Alan Williams (CSIRO) on a groundbreaking guide to Lanternfish (myctophids). I just painted a very rare Shepherd’s Beaked Whale for a friend who is a very dedicated naturalist. Together (after her edits) we managed to end up with a very good illustration of a very rare species. And, of course, the Tree of life Project for Elasmobranchs which is a truly groundbreaking scientific endeavor in it’s self, let alone the image component! 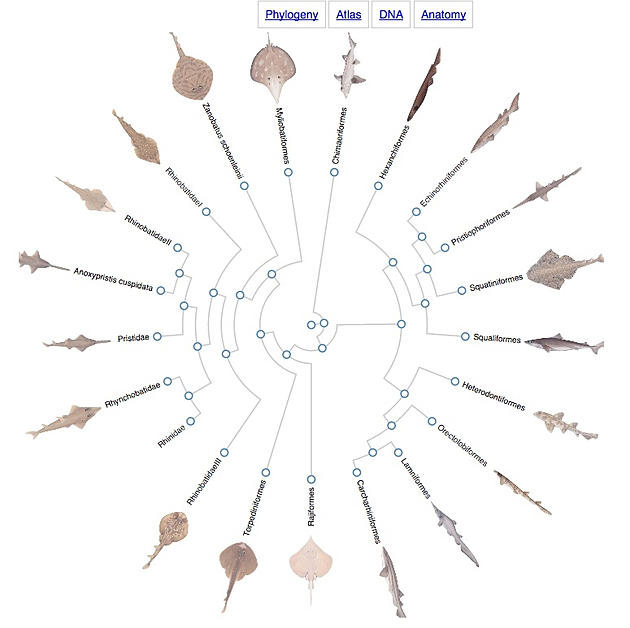 Is scientific illustration still relevant in an era when we have access to digital photography?

Absolutely. During the course of my illustration career I have had to re-create images of very rare species, where only one or two bad photographs - or terribly pickled type material - are available. Illustrators can compile a composite drawing, which highlights features that it might take many photographs to accomplish. Diagnostic features can be made to stand out in an illustration that are otherwise impossible to see in photographs. Illustrations, done in the same style, can achieve a continuity that can not be achieved by photographs alone. This continuity really makes the relevant information stand out and decreases the 'noise' of irrelevant information as seen in photographs. With the advent of digital technology, I think that people are so used to seeing photographs that illustrations really seem to make people stand up and take notice, as is the case for the Tree of Life Project. For a scientist to communicate their findings, they need to me clear and unambiguous. Scientific illustration can help achieve this where words or photographs can not. Communication of ideas is the crux of scientific development, and scientific illustrators are expert communicators!